The mosque was built in 1916 by the millionaire Mohsun Salim. It has an interior space of 210 square metres and a second floor with a 40-square metre women’s prayer room. The mosque’s entrance door is arch-shaped. The lower part of the dome, 14 metres in diameter, has 16 windows around it. The prayer hall is 19 metres high, floor to dome.

The mosque was closed for worship during Soviet times, but remained shut even after Azerbaijan’s independence as it bacame in a useless condition. Only after the Heydar Aliyev Foundation carried out major renovations and renovations in the mosque in 2006, the house of worship was put into operation for believers. Azerbaijani President Ilham Aliyev and his wife, President of the Heydar Aliyev Foundation Mehriban Aliyeva, attended the opening ceremony.

Mohsun Salim was a member of the Salimov family, Amirjan-based oil tycoons. According to a popular story, one fine day Mohsun Salim decided to have the Khanum Zeynab Mosque in Zabrat restored. However, the people of Zabrat objected and made him stop the work, claiming that they would see the restoration through on their own. Soon afterwards, in 1916, the millionaire built a mosque in Bina, now known as the Mohsun Salim Mosque, using the very same layout and design as the Zabrat mosque. There is no evidence to suggest whether this story is true or not. It could well be that the story is nothing but the result of two villages near Baku city having two nearly identical mosques. At any rate, all work is measured by its results and in this particular case the results are something to be proud of. 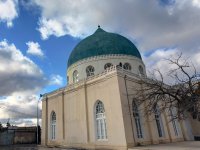 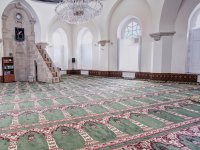 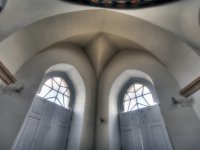