The Khirdalan Juma (Friday) Mosque was built in the Hijri year 1263 (1842 A.D.). Construction was initiated by Akhund Haji Molla Gafur Alaskar and was financed by the village’s wealthy residents. The mosque has 180 square meters for men, and the second floor for women is 48 square meters. meters. The dome, four meters in diameter, stands on the four arched columns inside. The dome has 4 stained-glass windows. The height of the tower is 32 meters. Inside the ceiling is inscribed four times in a circular section. The mosque building is rectangular.

The Khirdalan Juma Mosque is built in the Baku-Absheron architectural style. Its minaret was destroyed in 1937 during Soviet times, and the main building was used as a grain store for a collective farm for a long time. After Azerbaijan regained independence, the mosque was renovated and refurbished and a new minaret was built. The mosque has all necesary facilities for the peaceful worship of believers. 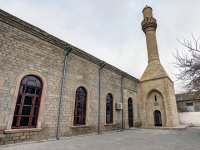 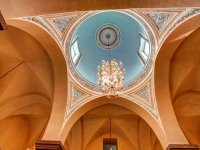